Spinder from Harkema to a brand new building in Drachten

It starts out as robust steel from Italy. Dairy Housing specialist Spinder Dairy Housing Concepts in Drachten transforms it into products that offer comfort to farmer and cow. Most of these products are exported. 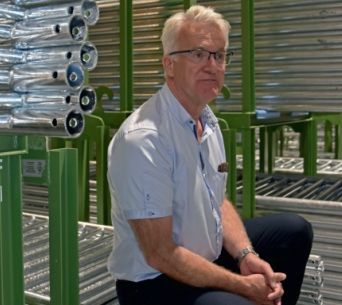 The top position of Frisian Dairy Farming is paying off for Spinder Dairy Housing Concepts. The Dairy Housing specialist from Drachten knows how to quickly convince dairy farmers from all over the world. Just as dairy farmers in Fryslân have achieved a top position, they are eager to join and aim for the top. Managing director Jehannes Bottema has a simple explanation: “Our agricultural sector has a good reputation.”

All together Spinder has about 80 kilometers of steel tubing in stock. It is this large stock of raw material with which Spinder has secured a continues production of dairy housing equipment for the coming months. This includes feeding fences and cubicle dividers and also several cow-traffic gates, manure scrapers and drinking troughs.

The laser cutting machines precisely cut the steel to size; the ‘red eye’ can even cut complex shapes with ease. In another part of the immense production hall, a robot bends steel tubes into the desired shapes. Even making half a dozen strange bends in one pipe would not be a problem. The fire from the welding robots melts the steel parts together and there are also some manual welders in their booths working on tailor made products.

Doing it yourself guarantees the highest quality.

There is plenty of activity in the brand new production halls. Further on, some employees are punching different parts. The older machines stand out from the rest of the modern machine park, but “doing it yourself guarantees that the best quality can be delivered”. "We live and breathe steel, that’s how we bring the very best to our customers", says Bottema.

Having a large stock op product is key for the dairy housing expert. “It is the strength of our company. This way we can fulfill the demand of our customers within a small timeframe but we can also produce efficiently. Not a single barn is the same but they are made up from a lot of standard components. We have those in stock.”

In the separate assembly hall, the galvanised parts are assembled in a continuous flow after which the complete products are stocked in the warehouse, ready for transport to dairy farmers across the world. 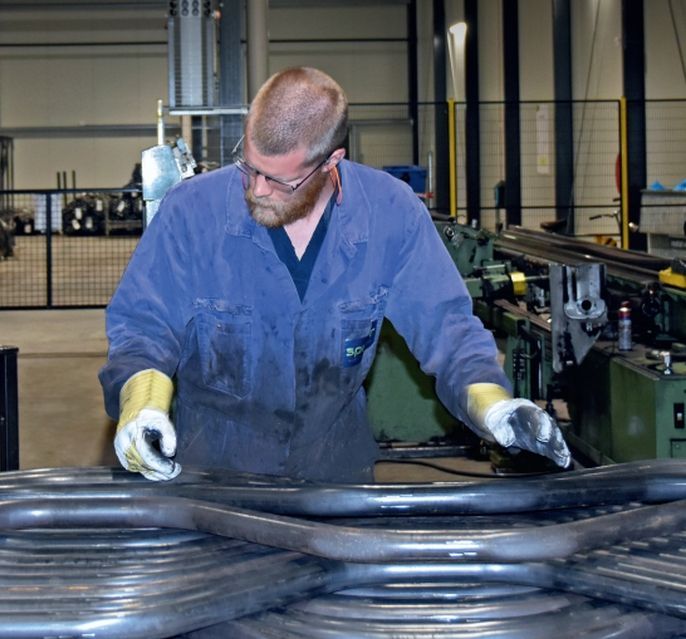 Spinder Dairy Housing Concepts has become an established name in the agricultural world. The company has grown in almost half a century thanks to the continues investments of Dutch dairy farming. Room for expansion lies in export. The arrows are aimed at the surrounding countries. About 55 percent of the turnover already comes from abroad. It is expected that this will only increase.

Spinder is profiting from the major modernization of the Belgium dairy farming sector. "Belgium farmers are building large barns, just as the Dutch farmers have done when the Dutch milk quota ended", says Bottema. "In the east of Germany we see farmers investing in upscaling."

In order to realize the growth ambitions, the dairy housing specialist has invested 12.5 million euros in a brand new building complex on the Azeven business park in Drachten. Spinder’s 50 employees have all the room they need work safely in the newly completed building. "Keeping our distance is easy in this nearly two-hectare (20.000 m2) building. This is a great advantage", says Bottema. In total there is 6 hectare (60.000 m2) of land available, enough to be able to expand in the future. For the time being it is a field of flowers.

Spinder has been planning the new build for quite some time. Driving off and on with heavy trucks in the village center of Harkema was too much of a burden. In addition the work was divided into two separate buildings. Ultimately the decision was made. The company started the move in the summer of 2019. The move has been completed in the spring of 2020. The company is now on a sight-location on the business park off the highway A7.

The connection with Harkema has been important for the village. The company stands for about fifty jobs and was a major employer for Harkema for a long time. Some nuance is however needed, says Bottema. People from a wider region work at Spinder, only a handful come from Harkema itself. Drachten hasn’t won the jackpot either; "Our employees mostly come from outside the city."

In 1973 Tjip Spinder started with the production and selling of dairy housing equipment. When, half a century ago, the Frisian dairy farmers changed from tie stall barn to the modern cubicle barn it was Spinder who, in Harkema, helped out the barn construction companies in the region with equipment made of galvanized steel. It has stopped being a family owned business since 1995 but the Spinder name remains associated with the dairy housing specialist.

The Spinder story started in 2016 for Jehannes Bottema from Opeinde. He has however made his contribution to the dairy farming sector for quite some time, as a manager at the Swedish manufacturer DeLaval he flew back and forth to Stockholm almost every week for years. Nurturing the traditional Frisian company Spinder to grow and flourish, was an immediate challenge for him. He is gradually acquiring complete ownership over time.

Sometimes the innovation of a company or products is pure coincidence. For example, talking over a cup of coffee previously led to a collaboration with the bed-manufacturer AVEK in Surhuisterveen. Foam residue from (human) matrass production is processed to the inner core of cow matrasses so that the cow can rest comfortably in her stall. “A cow needs comfort when resting and we provide her with that."

If the farmer takes good care of his cows, the cows will be good to the farmer. 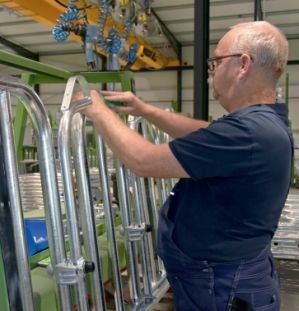 Beds are often on the minds of Spinder. They also supply waterbeds for cows. These are a thick rubber with pockets that can be filled with water and help the cow rest comfortably. The waterbeds have been developed with the cow in mind. For example, the front cushion, on which the cow kneels down, is filled with extra water so she doesn’t hurt her knees on the hard concrete flooring. The waterbed might seem like an investment in luxury and comfort, but it is also an economic investment with good return.

"A dairy farmer has every interest in good conditions for his cows", Bottema emphasizes. He only wants one thing; the longest possible life for a good producing cow. On average a cow will last five years on a dairy farm. With an extra year, the farmer significantly improves his yield. If the farmer takes good care of his cows, the cows will be good to the farmer.

Various innovative products from Spinder’s own engineers have received international awards. Bottema points to the Cuddle box, designed in collaboration with veterinarians to facilitate contact between cow and calf, just after birth. Good for the wellbeing of both mother and calf. Award-winning in all its simplicity and functionality at the Eurotier fair in Hannover, amid dozens of other high-tech innovations for animal husbandry.

Bottema likes to show of the company and the products. "We have nothing to hide, completely transparent." Groups of farmers and students, visitors from the Netherlands and abroad are more than welcome. A showroom and audio room have been set up to accommodate groups of visitors.

With a place in the finals of the election of Frisian Company of the Year (VFOJ), Spinder has earned a place in the spotlights. The judges took a thorough look at the operational management. Bottema hopes to be the winner during the, due to Covid postponed final, on September 22nd. In addition to the rapid growth to an annual turnover of 15 million euros, the rapid expansion abroad and the new building, winning would be the icing on the cake.